Does exactly what it says on the tin!

Operates flawlessly. Just what I needed.

What does WAV stand for?

What does WAV stand for?

WAV stands for Waveform Audio File Format. It is one of the most common audio formats and was created by Microsoft in collaboration with IBM. WAV files usually contain uncompressed audio encoded with Pulse-Code Modulation (PCM) audio codecs.

The standard file extension for WAV format, accepted by audio applications, is .wav.

The WAV files with uncompressed audio are taking more space than MP3, MP4, or FLAC files. Sending and downloading such WAV files also takes much more time and space. Therefore, in such cases, the WAV files are not as popular as their smaller, more portable counterparts.

WAV files also are capable of storing the audio processed with different compression audio codecs. The number of potentially supported WAV codecs is limited by 65535 (32767) by the WAV format (see the formatType field in the structures below).

To WAV Converter and To Audio Converter support output WAV codecs from the list below: 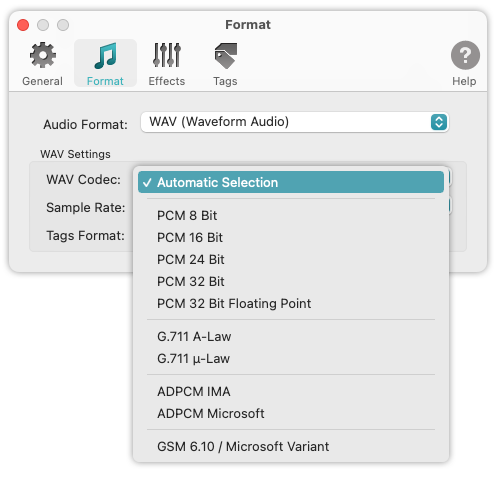 Codecs, such as G.711, ADPCM, and GSM 6.10 can provide a good compression and satisfactory quality for the Voice Audio.


The WAV Format and RIFF chunks

The WAV format is an application of the Resource Interchange File Format (RIFF), and use the same method for storing data. The data in WAV files are stored in chunks that contain a four-character tag and the number of bytes. Such an approach allows extending the format and keeping besides audio, also WAV metadata, subtitles, and video in the WAV files.

Below is the Format ('fmt ') chunk, describing the WAV Codec, Channels, Sample Rate, and Bit Depth of audio data in the WAV file.

The Sample Rate can be set to the arbitrary value from 1 to 4294967295 Hz. To WAV Converter and To Audio Converter support Sample Rates from the standard set, as in the picture below.

Read More: how to set up the WAV Sample Rate. >>

The WAV format can potentially support up to 32768 channels. To WAV Converter and To Audio Converter support standard channels - Mono and Stereo, as in the picture below. 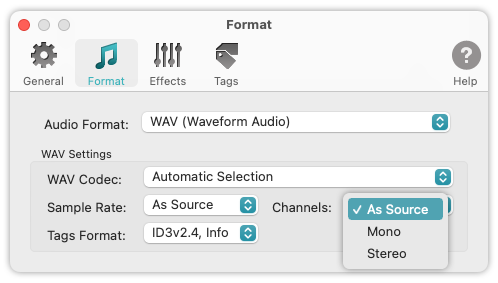 Read More: how to set up the WAV Channels. >>

As the WAV format is a case of RIFF format, WAV files can contain any kind of WAV tags, including but not limited to ID3, BWF, and Extensible Metadata Platform (XMP). 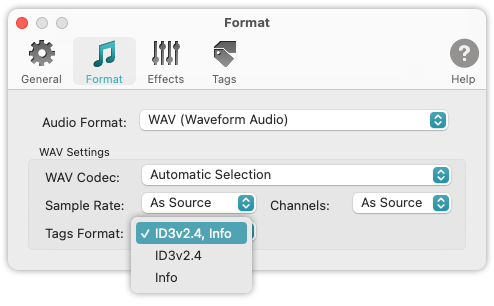 Also, a special RIFF chunk - INFO - was reserved for storing the WAV metadata.