I just fricken HAD to compliment

This is all the things i wish programs were. Simple. However its a very simple program but so many programs make simple things so hard with so many windows. This is so easy. for me I have a dmx light program that doesnt like mp4s like from itundes. I use to have to import in iTunes etc, find the darn file. Go to preferences, conver to wav, find the wav, move the wav to the foler finding the darn folder. With this, righ click, open the file with wave converter, hit convert and it makes a copy in the foler you startedd with. And isnt that what you want? Ya-put the darn file in that foler for a reason, its just the wrong type. Its so eash and so fast. So then I got To mp3 converter, wish has been so difficult!!! Now its so easy. I blame iTunes trying to make things so easy they made everything so hard. If other companies could follow this it would be great. Whom ever made this thank you, im looking for something to convert to mov, and im scared to get it from another company, hope yall made one.

What does AIFF stand for?

What does AIFF stand for?

AIFF stands for Audio Interchange File Format. The AIFF format was developed by Apple in 1988 and is mostly used on Mac computers. Generally, the AIFF format is Apple's equivalent to WAV files.

The AIFF files with uncompressed audio are taking more space than MP3, MP4, or FLAC files. Sending and downloading such AIFF files also takes much more time and space. Therefore, in such cases, the AIFF files are not as popular as their smaller, more portable counterparts.

The standard file extension for AIFF format, accepted by audio applications, is .aif, .aiff, or .aifc.


The AIFF Format and AIFF Chunks

The data in AIFF files are stored in chunks that contain a four-character tag, a chunk ID, and the number of bytes. Such an approach allows extending the AIFF Format and keeping besides audio, also AIFF metadata.

A chunk can be represented using the C-like language in the following manner:

The Common Chunk describes the fundamental parameters of the audio, such as SampleRate, Channels, Bit Depth, and can be represented with the following way:

The number of potentially supported AIFF codecs is limited by 4294967295 (2147483647) by the AIFF format (see the codecID field in the structure AIFFChunkHeaderCommon above).

To WAV Converter and To Audio Converter support output AIFF codecs from the list below: 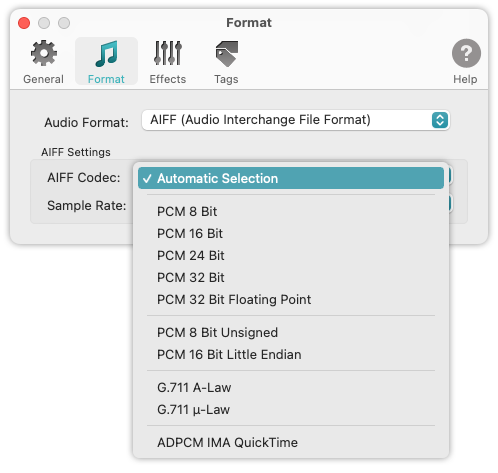 Codecs, such as G.711, ADPCM, and GSM 6.10 can provide a good compression and satisfactory quality for the Voice Audio.

The Sample Rate can be set to the arbitrary value from 1 to 4294967295 Hz. To WAV Converter and To Audio Converter support Sample Rates from the standard set, as in the picture below. 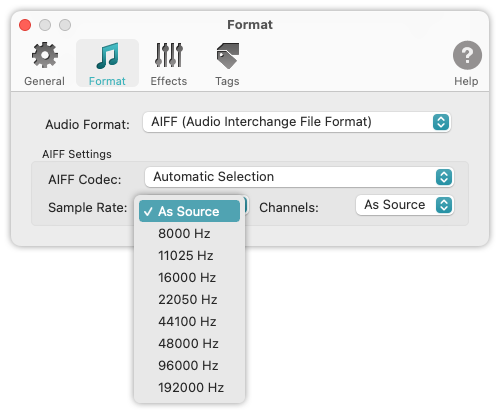 Read More: how to set up the AIFF Sample Rate. >>

The AIFF format can potentially support up to 32768 channels. To WAV Converter and To Audio Converter support standard fixed channels - Mono and Stereo, as in the picture below. 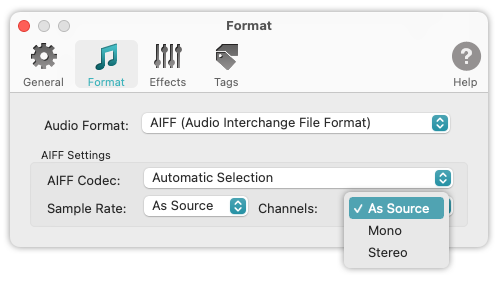 Read More: how to set up the AIFF Channels. >>

AIFF Format provides a special metadata chunk - a Name, Author, Comment, Annotation, Copyright, and ID3 chunk. Besides them, Extensible Metadata Platform (XMP) data can be stored in the Application chunk.

To WAV Converter and To Audio Converter support ID3v2.4 tags and store them in ID3 Chunk. When encountering tags in source files, the converters can transfer source tags and write them in ID3v2.4 format in resulting AIFF files.